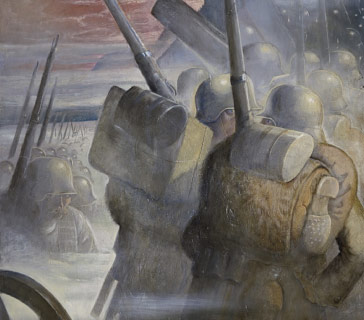 Topic: An Atheist in a Foxhole: Tolkien, Dix – and Nietzsche – on the Somme

At the battle of the Somme, two young men faced each other across No Man’s Land: the brilliant German painter Otto Dix and the English scholar and future novelist J. R. R. Tolkien. Dix had with him in the trenches the writings of his favourite philosopher, Friedrich Nietzsche. ‘Even war,’ Dix recorded in his notebook, ‘must be regarded as a natural occurrence.’ To Dix, the experience of the Somme was an abyss, across which, like a rope, a man might be suspended, fastened between Beast and Übermensch – Nietzsche’s superior moral human who could rise above conventional Christian morality. There was no truth, he believed, no value, no meaning itself – and only by acknowledging this could a man hope to cease to be a slave.

Meanwhile, in the opposing British trenches, Tolkien’s attitude to war was very different. He took notions of good and evil literally, in a way that reached back millennia. A devout Roman Catholic, he was also a scholar learned in the languages and history of the early Middle Ages. He and Dix, then, might have seemed opposed in every way that it was possible to be opposed. Time, though, would show that they had not been. How and why is the theme of Tom Holland’s talk.

Tom Holland has been described by the Classical Association as ‘the individual who has done most to promote the study of the language, literature and civilisation of Ancient Greece and Rome’. The best-selling author of Rubicon: The Triumph and Tragedy of the Roman Republic (which won the Hessell-Tiltman Prize for History and was shortlisted for the Samuel Johnson Prize), he has gone on to produce a series of critically acclaimed and prize-winning books, among them Persian Fire, his history of the Graeco-Persian wars, which won the Anglo-Hellenic League’s Runciman Award in 2006, and Millennium: The End of the World and the Forging of Christendom, which was published in 2008. His study In the Shadow of the Sword (2012), covers the collapse of Roman and Persian power in the Near East, and the emergence of Islam.

He has adapted Homer, Herodotus, Thucydides and Virgil for the BBC. His translation of Herodotus was published in 2013 by Penguin Classics and in 2016 by Allen Lane; and he has produced a history of the Anglo-Saxon king Æthelstan, in the Penguin Monarchs Series.